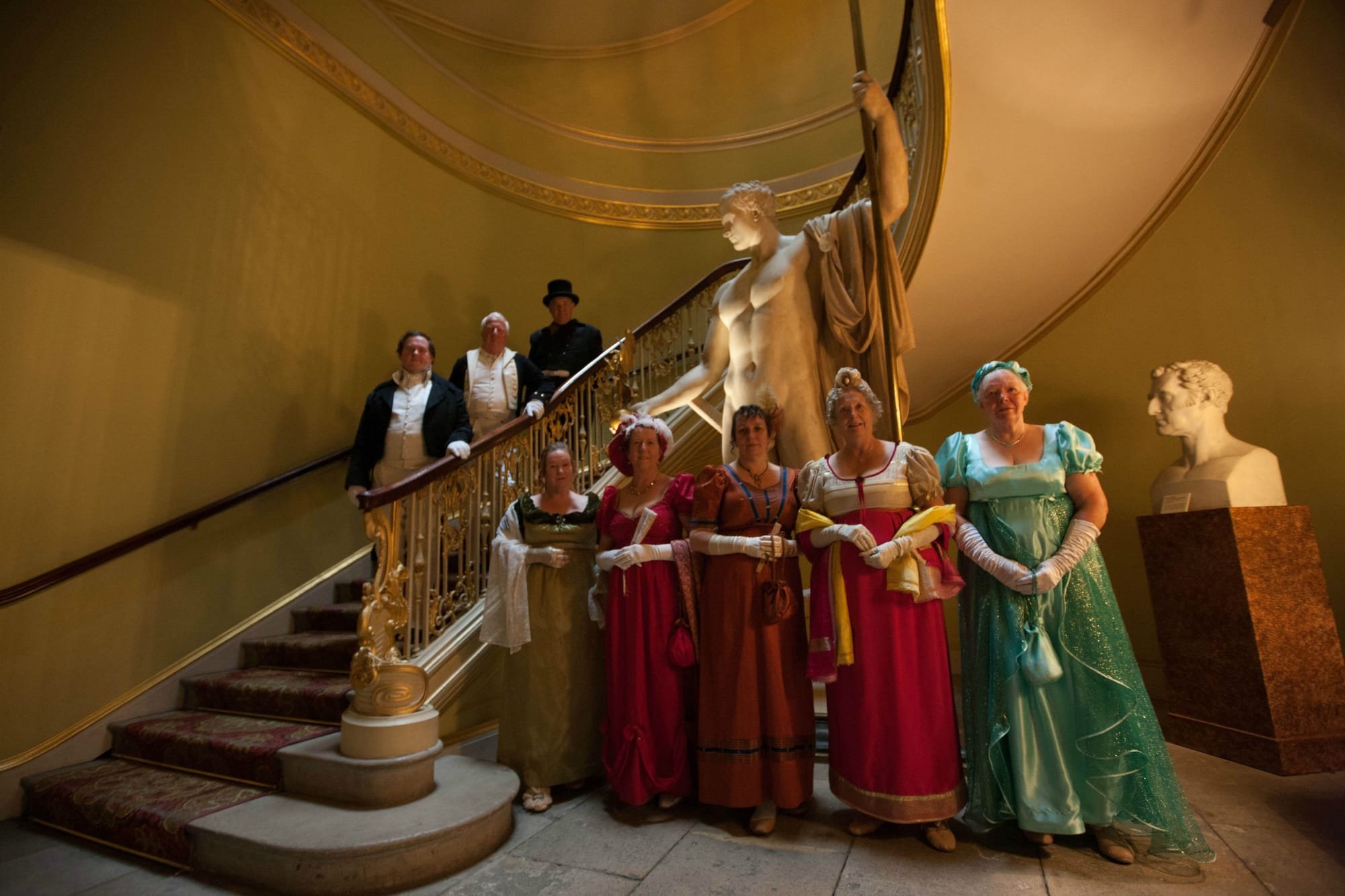 The Regency era in the United Kingdom is the period between 1790 and 1820.
Dances were major social events in late eighteenth and early nineteenth century society.  They provided a welcome opportunity for young people to meet and converse with their peers, and the duration of a dance was often the only opportunity they had to escape the scrutiny of their chaperones.  As a consequence, dancing afforded ample opportunity for flirtation amongst young people – something of which their elders were well aware.  Having said this, behaviour in all parts of life was constrained and strictly regulated by the etiquette of the day.  Posture, deportment and a sense of decorum were crucial, yet it was nonetheless possible for dancing to be fun.

Many manuals are available describing the dances of the period. However, even contemporaries could disagree about the interpretation of figures and as fashions changed over the years, so too did the dances. As a consequence, modern interpretations, although based upon original descriptions, continue to cause disputes.  For the most part, a Regency dance was known by the music that accompanied it and therefore a popular melody could have many associated dances or versions, thereby adding to the debate.

During a ball, the first lady would select the music to be played and the figures associated with that music would be danced.  If the configuration was in a longways set, the first couple would start the dance and repeat it for the entire length of the set from top to bottom and back again.  The dance did not end until the first couple was back at the start of the set.  Not surprisingly, even a single dance could take a long time to dance, giving a good opportunity for intimate chats with one’s partner.  In accordance with the etiquette of the day, it was very bad form and utterly unacceptable to leave a dance before it had finished.

Another requirement of Regency dance etiquette required a partner to be provided for any lady or gentleman in need of such for the current dance.  If necessary, the responsibility to find a partner fell to the Master of Ceremonies one of whose duties it was to provide partners; the gravity of the insult arising from Mr Darcy’s refusal to dance with Miss Elizabeth Bennett cannot be overestimated.
Regency dances were often lively and energetic with participants elegant, light upon their feet and graceful.  If dancers struggled to maintain the pace, the steps and footwork might be sacrificed for the sake of the timing.  Each figure in the dance matched the music – generally four or eight bars at a time – and it was important that each figure be completed precisely as the section of music ended.  While arriving late was a great social gaffe, arriving early was almost unforgivable.

Regency dances, and indeed the dress, differed from the preceding period, as much of the once popular French influence became less fashionable, possibly as a reaction to the revolution and the following wars.  Despite this, some dances from the previous period were enduringly popular and these were joined by dances based in part upon English country dances or upon the square-based cotillions originally introduced from the French court in the late eighteenth century.  However, the English style adapted the square patterns of many of these dances to a longways style that allowed the participation of many more dancers in a single set. Towards the end of the period, the waltz arrived in English society – a dance so shocking, due to its intimate dance hold that resulted in a closed couple dance, that it was banned altogether from many European courts.  In approximately 1816 quadrilles were introduced and these continued to be popular well into the Victorian era.